by Josh Sears on May 08th, 2018 under Uncategorized

Starting June 11th of 2018, Google is now charging every single user of the Google Maps API

This means anyone using Google Maps, whether straight up or integrated in a plugin, will now face being charged, regardless if they are a commercial entity, hobbyist, or non-profit. Check out the details here.

Back in 2016, Google started requiring the use of a Google Browser Key, which was essentially a tracking code that let them monitor how many users viewed your maps on a minute-to-minute basis. MapifyPro customers may remember this from previous versions of our own software. If you didn’t create your code. Google Maps (and all plugins built upon the platform) simply didn’t work.

They Have Every Right to Charge for Their Products

It’s clear now that they had a master plan. Google loves to spin their cash-grabs as beneficial to their customers (“This new plan gives you more flexibility and control over how you use our APIs” ….No, they don’t actually.), but this is plainly that: A cash grab. Now, they have every right to charge for their products, and they offer a somewhat generous buffer before the pay wall hits, but it’s also very predatory in how they’ve rolled it out. They’ve essentially conditioned their users—many whom will not realize they may eventually be charged—into implementing and relying on their platform before hitting them with this new payment requirement. No grandfathering in on this one: you either pay, or you remove Google Maps from your site. Even if you fall into the “free zone” you’ll still need to monitor and hope your traffic doesn’t hit their numbers that require a charge. Hoping for lower traffic on your site anyone? Didn’t think so.

Our team at MapifyPro foresaw this back in 2016, and knew it was time to move our software to a new platform. MapifyPro no longer uses Google Maps as a foundation, and hasn’t since last year. While it was a scary (and expensive) move for us in the beginning, we’ve found that the new system not only ditches the creepy “big brother” surveillance from Google, but it’s also simply better in every way. It’s just as powerful, allows for more features, ditches Google branding and legal restrictions, and of course contains no monitoring. It just works, and it always will.

We’ve had multiple, direct discussions with Google and the path they were taking, and we’ve discovered that numerous plugins are using their platform (the Google Maps API) illegally per changes made in 2016. It is understandable however because Google releases updates to their terms of use as they see fit, and they contain game-changers, just like this new update, that suddenly mention previously nonexistent charges. Developers can’t keep up, and suddenly find themselves facing legal issues with the Google giants, who promptly tell them to pay up or shut down. On top of it, they give them 30 days to do so, lest face legal action. Again, we get it: We shouldn’t expect to be spoiled into thinking we should have everything at no cost, but this is a pretty shady “gotcha” tactic, coupled with straight-out bullying. Not the type of companies we want to work with.

But that is a thing of the past with MapifyPro, and we’ve made some serious lemonade out of those lemons. Better maps, just as powerful, and not a single entity tapping your shoulder asking for more cash. We’re the first plugin to move away from the giants that are Google Maps, but certainly not the last. Be sure to check out our demos to see for yourself.

Will every single user of the Google Maps API be charged?

Starting June 11th of 2018, Google is now charging every single user of the Google Maps API. This means anyone using Google Maps, whether straight up or integrated in a plugin, will now face being charged, regardless if they are a commercial entity, hobbyist, or non-profit.

by Josh Sears on July 25th, 2016 under Uncategorized

Say goodbye to API Activation
We’ve been doing some deep meditation on the ongoing state of MapifyPro’s API Keys. After much thought and introspection, we have decided to remove the need to activate MapifyPro until a more user-friendly solution is available. You must still have an active subscription to our software (we have to keep the pesky pirates at bay after all) but after updating to the latest version of MapifyPro, you’ll no longer need to manually activate it via API.

Google Lays Down The Law

Ultimately we will always be under Google’s thumb when it comes to using their API, and recently they have released a new requirement: Each instance of MapifyPro must be associated with a Google Maps Key Code. This means you need to create a code and enter it in wp-admin in order to properly display any instance of Google Maps. That includes MapifyPro. Luckily, it’s as easy as can be. Just follow these simple steps:

1. After setting up a Google developer’s account, simply grab your key here.

2. In your WP-admin, navigate to the MapifyPro tab, and select “MapifyPro Settings”. You’ll see the field where you need to paste the code. It’s as easy as that. Note however that you MUST update to the latest version of MapifyPro to see this new field. Here’s a visual: 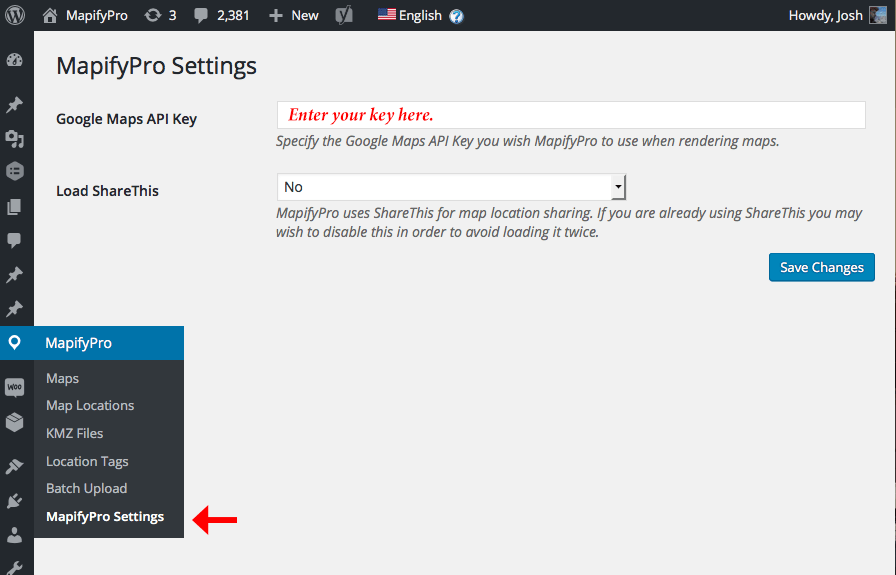 by Josh Sears on February 10th, 2016 under Uncategorized

NEW FEATURE: We have added a new feature that allows you to toggle your map settings in order to use miles or kilometers. This toggle will automatically change the labels used on the front end, as well as the algorithms for search radius.

-Fixed an issue where pinpoint image urls were not linking correctly, causing them to be hidden.

-Updated for more compatibility for more themes. Fixed a common issue where some users saw a double scroll bar on their site.

-Optimized the speed of the plugin for better performance.

-Misc. tweaks and optimization of the Google API.

Older Articles
Newer Articles
Scroll to Top
Manage Cookie Consent
To provide the best experiences, we use technologies like cookies to store and/or access device information. Consenting to these technologies will allow us to process data such as browsing behavior or unique IDs on this site. Not consenting or withdrawing consent, may adversely affect certain features and functions.
Manage options Manage services Manage vendors Read more about these purposes
View preferences
{title} {title} {title}